A new foundation stone is laid

It is just over 60 years since a notice appeared in the Glasgow Evening Times and The Milngavie & Bearsden Herald inviting all brethren interested in forming a new lodge, to attend a meeting in Westerton Hall on Monday 21st December 1959.

At that meeting which was chaired by the late Past Master J.J. McNeill, and attended by the then Provincial Grand Master, Brother Harry Blair, the 67 brethren present voted unanimously to erect a new lodge.

On the 20th April 1960 a formal application was made to The Provincial Grand Lodge of Dunbartonshire for the granting of a Charter under the name of Lodge Bearsden.There were 78 Founder Members from 48  different Lodges, one of which was from the English Constitution. The two Sponsor Lodges were Lodge Ellangowan No 716 and Lodge Cochno No 1304 and the application having been approved by Provincial Grand Lodge at their meeting in April, Grand Lodge granted a Charter to Lodge Bearsden on 4th August 1960, allocating the number 1572 on The Roll. 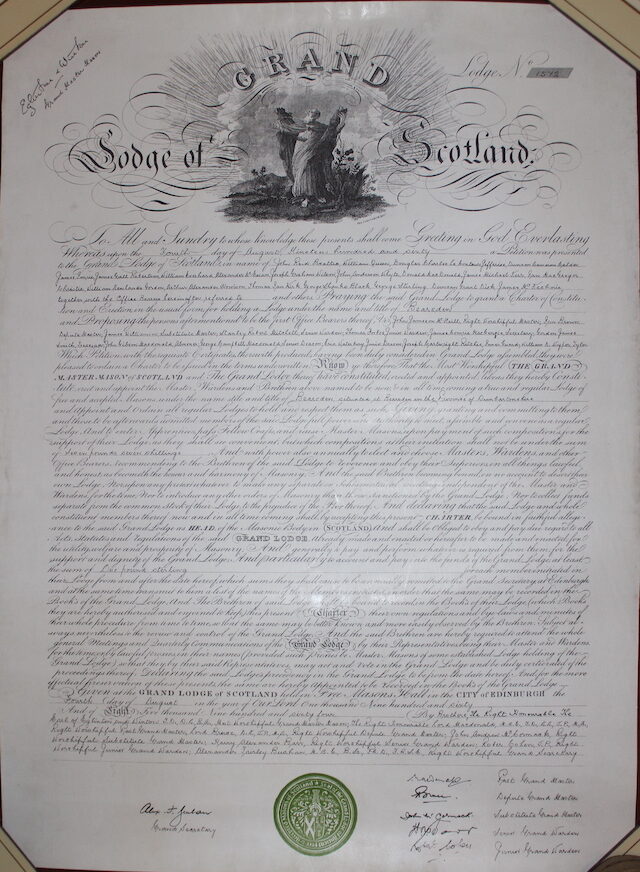 Our colours and regalia

The colours adopted by the Lodge were those of Bearsden Academy namely, Cerise, Green and Gold which are still worn proudly today.

In October of the same year a Chain of Office for the Master was presented by Brother Henry Blair P.G.M. and Brother Ian M. Brown P.G. Secretary, who was appointed as first Depute Master of the new lodge.

On the 12th November 1960 some 600 brethren assembled in Bearsden Burgh Hall for the Erection and Dedication Meeting when Brother John J. McNeill was installed as the first Master of the Lodge by Brother Blair the P.G.M. assisted by Brother Alexander Anderson S.P.G.M.

This meeting was also attended by Brother Sir George Graham O.B.E. J.P. Past Depute Grand Master and Brother Alexander F. Buchan Grand Secretary representing The Grand Lodge of Scotland and following the ceremonial aspects of the day some 300 brethren sat down to dinner.History records that The Provincial Grand Master of Glasgow Brother Ernest Noakes replied on behalf of the Guests and he proved to be a very faithful supporter of 1572 for many years thereafter.

On the 10th June 1961, The Lord Lyon granted a warrant to matriculate a Coat of Arms for the Lodge. This was duly entered in page 32, volume 45 of the Public Register of All Arms and Bearings in Scotland.

The Coat of Arms comprises amongst other things a bear representing Bearsden, its muzzle meaning that virtuousness and unpleasantness are held in check. Also prominent is a green field which may be interpreted as meaning wisdom with the gold of the chevron symbolising the pure, God given light of freemasonry emanating from The Grand Lodge of Scotland.

Our history was epitomised in the eloquent speech delivered by Bro. Angus Cameron at our 50th anniversary celebration

First Master of our Lodge

Past Masters of Lodge Bearsden